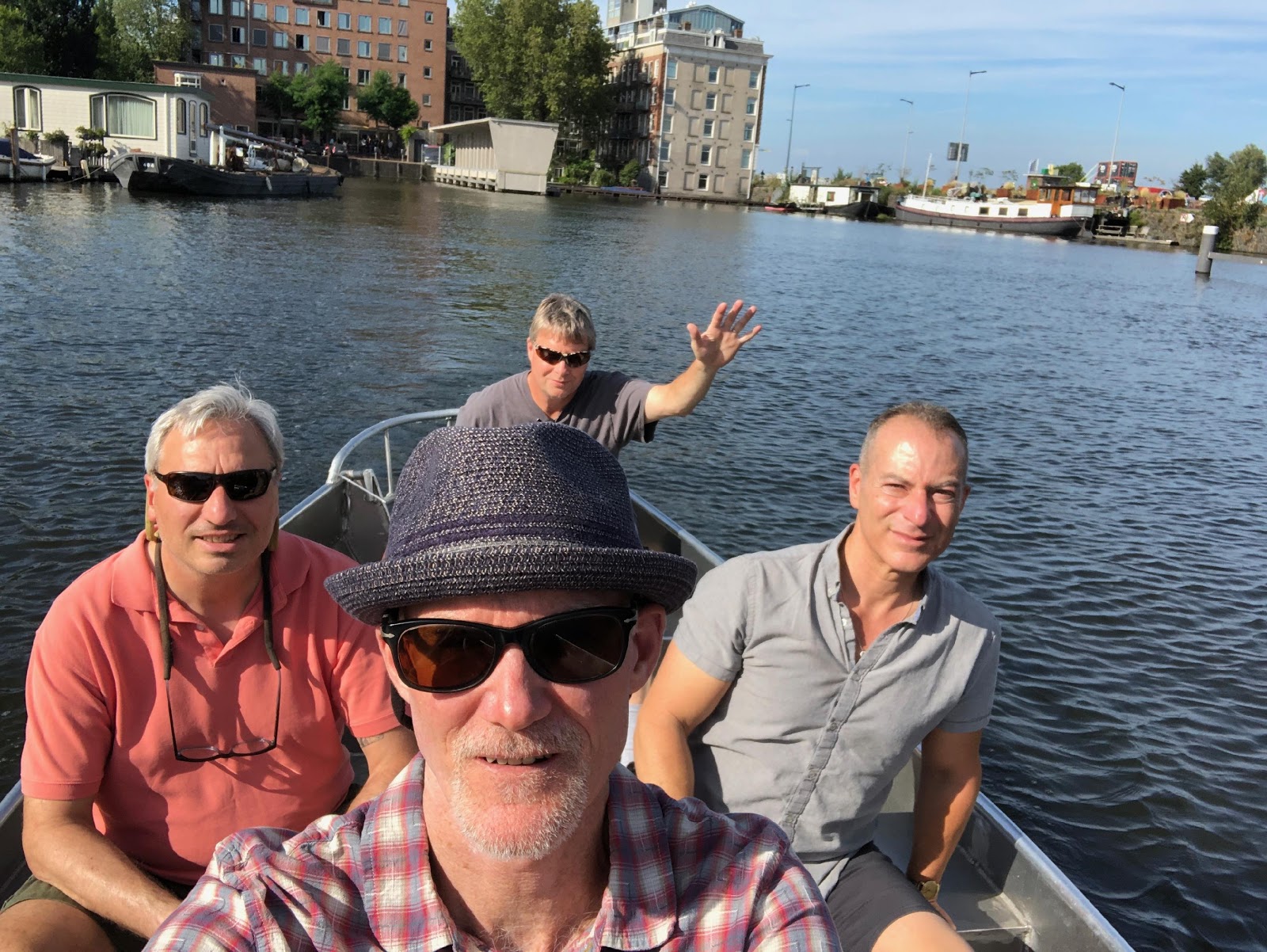 Men Of The Woods in Amsterdam Pt.3

The bleary-eyed bunch woke up around 9:00 a.m. and began screaming for coffee.

We pulled ourselves together and hit the street, on our way to Blue, a popular eatery that offers excellent brunch, with a great view of the city.

Amsterdam is home to many fantastic museums, and the guys definitely wanted to see the big three:  The Rijksmuseum, Stedelijk Museum, and the Van Gogh Museum. They also wanted to visit the Anne Frank house (Rosen especially), but they were fully booked.  It’s the most popular tourist attraction in Amsterdam (probably the entire Netherlands), and unless you book a few weeks in advance, it’s difficult to get tickets.

On today’s agenda: The Rijksmuseum.  To save time by not having to stand in the ticket line, I purchased tickets for all of us online, ahead of time.  With Barry unable to join us, we had an extra ticket. Barry said he would reimburse me for his unused tickets, but we were going to do our best to try to sell his ticket at the various venues. Chaz is good at wheeling and dealing, and he tried to persuade several tourists on the ticket line to buy the ticket from him, at a discount. Alas, it was to no avail.

If you were to make the analogy, then the Stedelijk museum is Amsterdam’s MoMA, and the Rijksmuseum in Amsterdam’s Met.   It’s huge, and it would easily take you a week to see everything there. Most people head to the main gallery, to view the two big attractions:  Vermeer’s “The Milkmaid” and Rembrandt’s “Nightwatch”.

You can purchase an audioguide for 5 euros, or you can download the Rijks app for free. I’d used the app several times in the past.  The other guys downloaded it, and we all listened to descriptions of the major works.

Unfortunately, The Nightwatch wasn’t viewable.  It was being scanned, using x-ray technology, as part of a big study of the painting.  The scanning set up was pretty interesting, but it did prevent viewers from seeing it up close.

We slowly meandered back to the apartment to rest up for a bit.  A fun afternoon and evening was in store. I had reserved a small motorboat for the four of us, for two hours.  After that, we would take the ferry across the IJ river and go to the EYE Film Institute for dinner at their beautiful restaurant.

Getting to the boat was tougher than I thought.  Because dinner was going to be in the very northern part of the centrum, I chose a boat rental place also in the north.  On the map it didn’t look that far, but it turned out to be a pretty far walk, which was tough on Chaz’s knee.

We finally got to the pier and were given our boat.  Chaz was up front at the steering wheel, while Plumeau manned the rudder in back.

We were given a map showing us which canals we were allowed to sail on and what direction traffic flowed.  Off we went. The weather was perfect.  You get a very different perspective of the city when you’re on the water. The architecture really hits you, and you can see just how beautiful it really is.

At one point, we pulled over to the side of one canal, and Plumeau climbed out of the boat and ran off to look for some beer.  He came back with a six-pack of Heineken, making the last half of the boat ride even better.

The last fifteen minutes of sailing were the best. We arrived back at the boat rental a bit faster than we thought, so we took a small detour down some nearby canals, through a quiet suburban neighborhood that was off the beaten track.  The scenery and houses were very non-touristy, and it made for an interesting end to our boat ride.

We walked to the ferry behind Central Station.  The ferry is free. It’s a fun ride, even though it only lasts five minutes.  We made our way to the EYE, where we tried to get an outdoor table overlooking the water.  There wasn’t one available, so we took a nice inside table instead. We ordered our food, and we each had a drink while we waited for the food to arrive.  We waited, and waited, and finally realized that something is amiss here. Plumeau went to the bar where the waiter was standing, and told him that we had been waiting way too long for our dinner.  He came back to our table and told us that somehow, our order wasn’t put into the kitchen. He apologized profusely, said that our food would be out in ten minutes, and offered a round of free drinks for the table.  I was fine with that, but Chaz and Rosen negotiated two desserts instead! The food arrived quickly now, and it was excellent. The four of us then split the two gratis desserts. Not a bad deal. We then took the ferry back, and to save some wear and tear on Chaz’s knee, we took a tram back to the apartment and ended our evening.