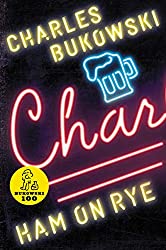 Earlier this year, I read my first Bukowski book, Post Office, and I liked his straightforward, gritty style. Ham on Rye is supposed to be his masterpiece, so I gave it a try.  The book chronicles the pretty unhappy years of Bukowski’s childhood and adolescence, told through his alter ego, Henry Chinaski.  There’s lots of belittling by his father (including being beaten with a strap), lots of teasing from his schoolmates, and lots of drinking and fighting.  Bukowski also spends a lot of the novel (I mean, A LOT) describing in gross detail the horrific case of acne that he developed on his face, chest, shoulders and back. He spares no detail about pus, blood, and boils, so be forewarned.  This is a no-nonsense, nothing-held-back coming-of-age story set mostly during the Great Depression. There’s no plot per se, just an unflinching tale of struggle and survival, along with a sharp critique of middle-class life and all the bullshit that goes along with it.

“Ham on Rye” by Charles Bukowski