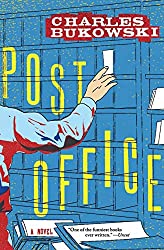 I’m late to the party in terms of reading Charles Bukowski.  My high school friend John was a big fan, and I know other people who rave about his work, and I love the aesthetics of the book covers, but I’d never read anything of his until now.  Not sure what I was expecting, but with Post Office you get some very straightforward, unembellished, no-bullshit story telling.  In this book, he tells the semi-autobiographical story of Hank Chinaski, a postal worker who hates his job but can’t seem to break free from its grip. The book provides a view of the working-class world, teeming with petty bureaucratic loser bosses, endless booze, cigars, horse-racing, and women.  It’s a candid account of the absurdities of modern life told by an alcoholic, misogynistic mess.  He’s lazy and self-destructive and not very nice, but I suppose that’s part of the appeal.  Count me in as one of his fans now, I guess.  I’m looking forward to his other novels.