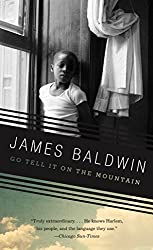 Quick Book Review: “Go Tell It on the Mountain” by James Baldwin

After being amazed by Baldwin’s “Giovanni’s Room” a few weeks back, I was anxious to explore additional novels by him. This semi-autobiographical book was his first major work, published in 1953. It’s a coming-of-age story that deals primarily with religion, although there’s a lot about race, classism, sex, and violence.  The themes are heavy and the book, though not too long, is pretty dense. The main plot line concerns John Grimes, a teenager living in 1930’s Harlem, and the tumultuous relationship he has with his family and his church.  John is the stepson of the minister Gabriel Grimes, an angry, hypocritical, religious zealot.  The novel also delves deeply into the backstories of John’s mother and his biological father. These backstories are amazing, especially when describing the hard, bitter lives of the women characters, like Florence and Elizabeth.  Baldwin’s prose is amazing, going back and forth between straight narrative and pure poetry.  I’m not a religious person, and I was expecting to find the constant religious references tedious, but the visceral, relentless preaching from the hypocritical, womanizing, abusive minister is powerful and gripping, and I found myself totally mesmerized by the lyrical writing.  This is a passionate, character-driven novel, and the fact that it’s semi-autobiographical explains a lot of why Baldwin wrote the way he did.  A magnificent book.

“Go Tell It on the Mountain” by James Baldwin