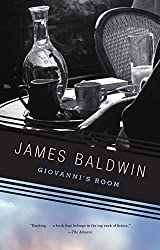 I’ve wanted to read this Baldwin classic for years, ever since visiting a popular gay bookstore in Philadelphia that named itself after the novel. A few months ago, I read a novel called Swimming in the Dark. In that book, the main characters bond over a shared love of the book.  I finally hit The Strand and purchased the book.  It’s hard to put into words just how amazing this novel is.  A heartbreaking, emotional, intense tale of yearning, loss, self-loathing, internalized homophobia, shame, desperation and introspection.  The narrator, David, enters into a relationship with the beautiful and volatile bartender Giovanni.  David, however, struggles to suppress his sexual orientation, deceiving himself into thinking that he can find happiness with a woman he has promised to marry.  The end result is misery for David and utter ruin for Giovanni.  The prose is brilliant and beautiful. The characters are unforgettable.  There is so much emotion packed into a mere 150 pages. Some scenes literally had my pulse racing.  Only Baldwin could take a relatively simple plot and imbue it with such passion and intensity as to leave the reader totally spellbound.  Deserves to be on everybody’s bookshelf.