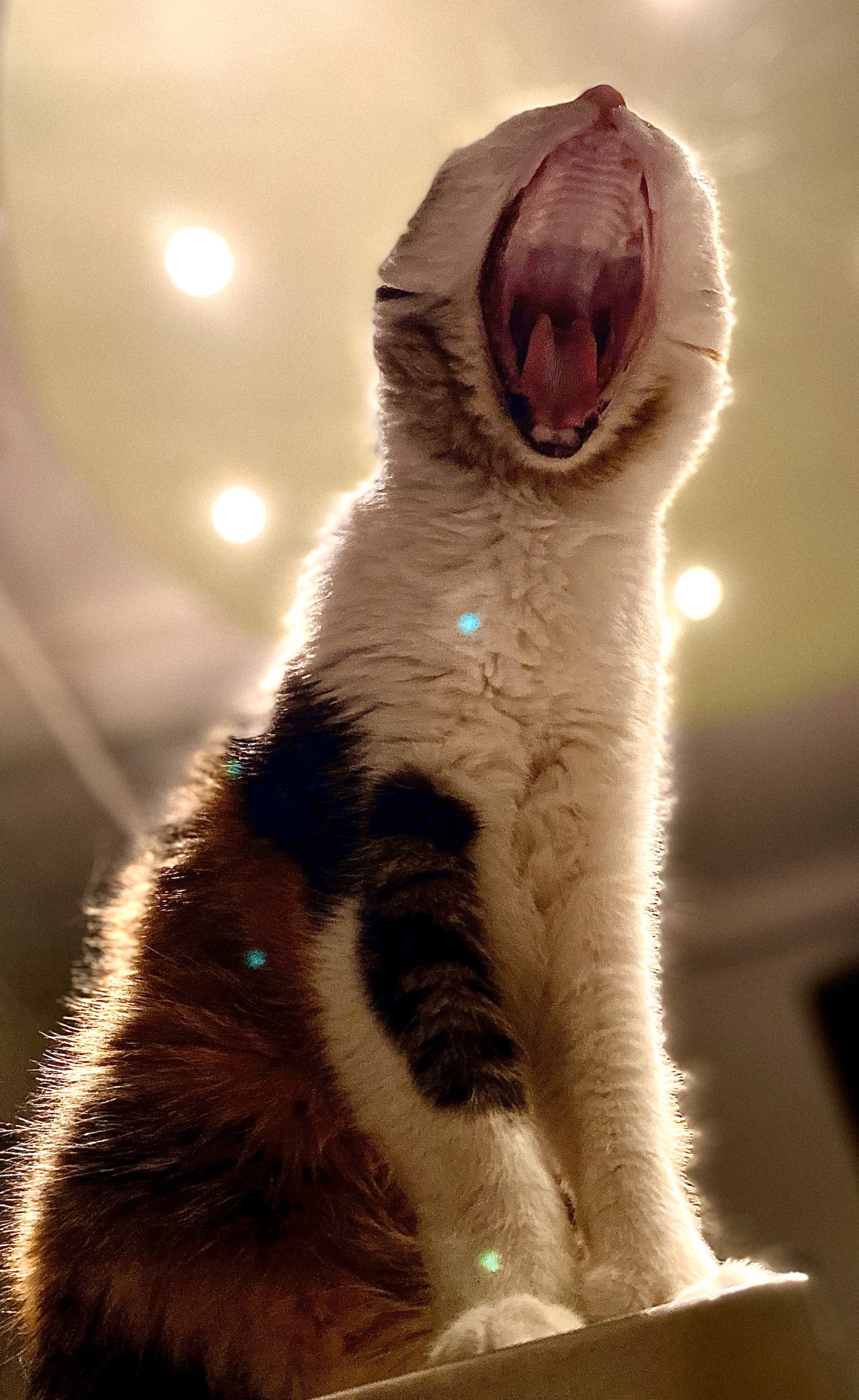 Disease processes occur in the mouth more than anywhere else in a cat’s body.  Dental disease is very common, and if untreated, it can lead to bad breath, swollen and bleeding gums, difficulty eating, and oral pain.  Cats are secretive by nature, and they often don’t reveal that they are experiencing oral discomfort.  Occasionally, cats reveal that their mouth is hurting by drooling, deliberately turning their heads to one side as they eat to avoid chewing on the side of the mouth that’s painful, and sometimes pawing at their mouths.  Some may stop eating dry food because it’s become painful to crunch and will only eat wet food.

The Burmese cat is one of my favorite breeds.  Adorable little faces aside, as a feline practitioner I loved my Burmese patients for how friendly and cooperative they were in the examination room.  Whether it was a routine physical exam, taking an x-ray, or obtaining a blood sample, they made my job easy.  (I like the breed so much that in November of 2015, while vacationing in Burma, I visited – and wrote about – the Inthar Heritage House, a Burmese Cat Sanctuary on Inle Lake. Visit catster.com and type “Burmese” in the search box to read about their Burmese cat conservation program and see my photos of the cute residents there.)

Although all breeds of cat are susceptible to oral/dental disease, there is one enigmatic (and thankfully not very common) oral condition for which Burmese cats are particularly predisposed.  It is called feline orofacial pain syndrome, abbreviated FOPS.

The main sign of FOPS that a cat owner notices are exaggerated licking and chewing movements, with pawing at the mouth.  Typically (but not always), the discomfort is unilateral or worse on one side.  The signs of oral discomfort can be continuous (20% of cases), but often times it comes in discrete episodes (80% of cases).  These episodes of discomfort are often triggered by mouth movement, such as eating, drinking, or grooming.  Episodes can last a few minutes, or they can go on for several hours, with some people reporting a brief period of anxious behavior by the cat just prior to an episode.  Distracting the cat temporarily out of the episodes is possible in some cats. Severe cases can result in the cat damaging their tongue from the repetitive chewing motions, or injuring their face from aggressive pawing. Most cats appear to be pain-free between episodes.

The exact cause of the disorder isn’t certain, but FOPS shares some clinical features of 2 neurologic facial pain syndromes in humans: trigeminal neuralgia and glossodynia.  Trigeminal neuralgia is characterized by brief episodes of severe pain in the areas of the face that receive innervation by the trigeminal nerve, mainly the upper and lower jaw.  Glossodynia (also called “burning mouth syndrome”) is a condition in humans in which patients experience altered taste perception, dry mouth, and a burning or tingling sensation in their mouth, especially on the tip of the tongue. Indeed, in many affected cats, tongue discomfort seems to be the main issue.

Although FOPS has been reported in Siamese, British Shorthair, Somali, Tonkinese, and domestic shorthaired cats, the Burmese is markedly over-represented: in one study of 113 cats, 100 of them were Burmese.  Dental issues can predispose cats to developing the condition, such as periodontal disease.  In some cases, signs of FOPS began soon after the baby teeth fell out and the permanent teeth erupted.  Environmental factors may play a role as well. One study showed that in 20% of cases, individual cats from multi-cat households who showed poor social coping skills were more vulnerable to this condition.

There is no definitive diagnostic test for FOPS.  Diagnosis is made based on the clinical signs (episodic licking, chewing, pawing at the face), breed (Burmese), and elimination of other causes for the clinical signs, such as a foreign body stuck in the mouth or throat, or another neurological disease that could affect the trigeminal nerve, such as cancer.

Treatment can be challenging.  An Elizabethan collar can be used to prevent damage to the face by excessive pawing, or soft plastic nail caps can be applied to the paws.  A referral to a veterinary dentist is worth considering, since dental issues can aggravate the condition; in one study, approximately 50% of cats with FOPS that underwent dental treatment had sustained improvement in clinical signs. Because this is a painful condition, analgesics are the mainstay of treatment. Non-steroidal anti-inflammatory drugs (NSAIDs) can be given, but must be dosed carefully, as cats do not metabolize them very well.  Pain medications such as gabapentin are often effective and may be given in combination with NSAIDs.  In cases that respond poorly, anti-epileptic drugs should be considered, as some of these drugs have analgesic, desensitizing properties.  Environmental factors should also be addressed. Identifying social incompatibility in a multi-cat household is important, and if present, steps should be taken to correct it.

The prognosis for FOPS is considered fair to good.  Spontaneous remission may occur in a small percentage of cats, but most require treatment.  Many cats (about 50%) respond to short-term medication during episodes.  Some can be weaned off medication entirely, or at least between recurrent episodes.  About one-third of cats require long-term treatment. Sadly, despite treatment, some cats cannot be made comfortable. In that study of 113 cats with FOPS, 12% of the cats had to be euthanized due to treatment failure.

Fortunately, FOPS is a rare condition.  In my 32 years of veterinary practice, I have yet to see or treat a case of it.  Owners of Burmese cats should be aware of the condition and make sure that their cat receives regular veterinary checkups, with particular emphasis on dental care.