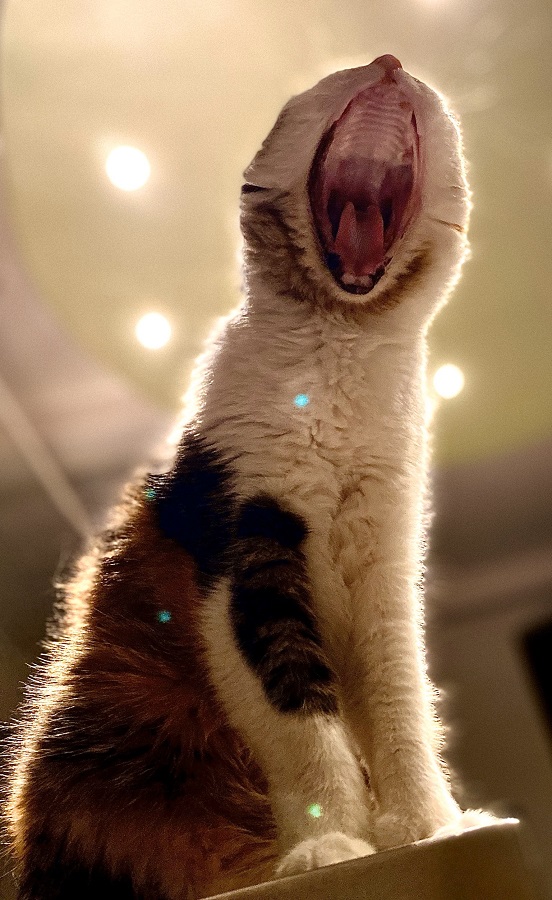 Persistent coughing and labored breathing in humans have taken on heightened significance in the past year, as they are commonly reported symptoms of covid-19 infection.  Not all coughing and wheezing in humans is of viral origin, however.  Asthma in humans is a disease of the lower airways that can cause coughing, wheezing, labored breathing, and a decreased ability to exercise.  These signs occur because asthmatics have over-reactive airways that may undergo spontaneous narrowing (bronchoconstriction) if they become exposed to certain substances.  A remarkably similar condition exists in cats.  Feline asthma is a disorder of the lower airways characterized by recurrent episodes of coughing, wheezing, and labored breathing.  The prevalence of asthma is around 1% of the feline population, however, Siamese cats are predisposed; the prevalence in Siamese is nearly 5%.  Asthma is a type of allergic bronchitis.  Determining exactly what the cat is allergic to can be challenging, but cat litter dust, second-hand tobacco smoke, molds, pollens, and dust from home renovation have all been implicated in triggering asthma in cats.

Coughing in cats can be difficult to recognize by some cat owners.  Typically, a cat will hunker down, extend his neck, and make a raspy noise several times.  Episodes are usually brief, with the cat resuming his normal behavior after a few minutes.  Many people erroneously assume that a hairball is to blame.  As a feline practitioner, I’ve heard the mistakenly used phrase “cough up a hairball” countless times.   Hair, when swallowed, accumulates in the stomach. When it reaches a large enough size, the cat is triggered to vomit. Coughing comes from the lungs, not the stomach.  Coughing is a respiratory sign. When clients tell me their cat is “coughing up a hairball”, my job is to distinguish whether the client is witnessing an attempt to vomit or to cough.  Fortunately, in this age of smartphones, most clients video what they’re seeing at home, and I can tell right away whether or not we’re witnessing a cough. Other respiratory signs may also be present, such as labored breathing (dyspnea) or rapid respiratory rate (tachypnea).

There is no single diagnostic test to obtain a definitive diagnosis of asthma. A diagnosis is usually made based on the clinical signs, physical exam findings, and chest x-rays.  On x-ray, asthmatic cats often show a lung pattern that has been described as “donuts and train tracks”. These represent an accumulation of inflammatory cells around the airways.  Other helpful tests may include a complete blood count and a heartworm test.  Cats with asthma often (but not always) have an increased level of eosinophils, a type of white blood cell associated with allergic or parasitic conditions.  Heartworm disease, although uncommon, has clinical signs that overlap with asthma.  A positive heartworm tests suggests heartworm disease as the cause of the respiratory symptoms.  A negative test makes asthma more likely.  Underlying heart disease can have clinical signs in common with respiratory disease (coughing, wheezing, labored breathing, increased respiratory rate), and it can be difficult to distinguish between the two, particularly if the physical exam and the chest x-rays are ambiguous.  In these cases, a blood test that measures the levels of a hormone called NT-proBMP may be helpful.  This hormone is derived from the heart.  Cats with heart disease will have higher circulating levels of this hormone.  Cats with respiratory disease should have normal levels of this hormone.

Treatment of feline asthma can be challenging.  Asthmatic cats presenting in acute distress (i.e. an “asthma attack”) require quick and accurate assessment and emergency treatment.  This includes supplemental oxygen either by face mask or oxygen cage. Mild sedation may be necessary to reduce patient anxiety.  Bronchodilators (drugs that open the airways) should be given, either via inhalation or injection.

Long-term management of feline asthma involves reducing airway inflammation and relieving airway constriction.  Many therapies have been investigated, but the mainstays of asthma therapy continue to be steroids and bronchodilators.  Inflammation is best controlled with oral steroid drugs like prednisolone.  Initially it is given in high doses until the clinical signs are controlled, and then the dose is tapered.  Bronchodilators should be considered in conjunction with steroids, especially if wheezing is present, as this indicates a narrowing of the airways.  Bronchodilators should not be used as a stand-alone treatment because they do not address airway inflammation which is the primary issue in asthmatic cats.

Giving oral medication to cats can be a chore, especially in tablet form.  Most tablets can be compounded into a flavored liquid, improving palatability and ease of administration. An alternative to oral medication is the use of an inhaler. Metered-dose inhalers (MDIs) are commonly used in asthmatic humans, allowing high concentration of drugs to be delivered directly to the lungs.  Inhalers designed for humans require coordinating the activation of the device with a slow, deep inhalation. This cannot be controlled in children or animals.  To get around this, a spacer is added to the MDI.  The spacer is a plastic chamber about the size of an inner roll of toilet paper.  The inhaler fits on one end of the chamber, and a specially designed facemask attaches to the other end.  To use a MDI in an asthmatic cat, the owner attaches the inhaler to the chamber, presses twice to deliver the medication into the chamber, and then places the mask over the cat’s face and lets the cat breathe in and out about 10 times.  Although it might be hard to imagine a cat tolerating this, you would be surprised.  I’ve had many skeptical cat owners call me up shocked that their cat doesn’t seem to mind it, and more than a few have told me that their cat almost seems to like it, as if they know it is helping them.

Veterinary researchers have investigated many potential new therapies for feline asthma, including the use of omega-3 fatty acids, allergen-specific immunotherapy, and stem cell therapy. Some of these treatments have shown promise in experimental models of feline asthma.  More research needs to be done to see if these treatments turn out to be clinical useful.

Inhaled Medications: Another Option for Medicating Your Cat

Feline Body Parts – The Lungs of a Cat