The pandemic has frustratingly closed off many of my former avenues of enjoyment in retirement.  However, one advantage of my not being able to go to gyms, museums, and movies is that I have a lot of free time during the day to pursue my newfound passion, street photography, and there’s no shortage of subject matter or inspiration here in NYC.

It’s been a very hot and sunny summer here in the city.  The bright sun allows for some great photos that take advantage of light and shadows.  However, in a big city like this, with all that glass and metal, the blazing sun causes an awful lot of glare.  Is this something I need to be concerned about as a photographer?

For this, I defer to the experts.  From what I’ve read on various websites and have seen in several videos, many photographers do think that glare is an issue and that polarizing filters can offer some benefit.

I enjoy using Moment’s lenses with my iPhone; my photographs have improved since I started using their lenses.  Recently, Moment had a sale on some items, including their CPL (circular polarizing lens) filters. I decided to check it out.  The filter wasn’t expensive, and if this could potentially make my photos look better, I’d want to know about it. I placed my order, and it arrived two days later.

Inside the box is the cute little pouch and the filter mount.

The CPL lens removes reflections and glare from shiny surfaces, such as water or glass.  So, for example, if you wanted to take a photo of some koi fish in a pond, but you couldn’t see the fish clearly because sunlight was reflecting off the surface of the pond, a CPL filter would allow you to see through the glare into the pond.  Likewise, if you wanted to take a photo of someone in the driver’s seat of a car, the reflection in the car window can be reduced a bit if you have a polarizing filter attached, allowing you to see the driver better.

I decided to test it out right at my desk.  I took the circular filter case and put it right behind the lens of my eyeglasses.  You can see the lettering on the case through the eyeglass lens, but it’s not easy to read.

I then put the filter on and took the same photo, trying to get as close to the same position as before.  The lettering is easier to read.  Granted, it’s subtle, but it’s there.

It’s not just for glass and water.  Any surface that has some reflective properties will be affected by the lens.  I tried it again while on the subway headed to the beach.

In the first picture, Mark is sitting on the train, and his pink shirt is reflected in the shiny plastic of the seatback.

Then I put on the filter. I should mention that once you attach the filter to the mount, you have to rotate it (while it’s aimed at a shiny surface), to see which position gives the maximum effect.  I rotated the filter, and lo and behold, most of the reflection disappeared.

This may be beneficial if you’re taking a picture of something glossy, like a car, and you want a more uniform look rather than having some distracting glare.

That day, on the beach, it was exceptionally sunny, and I kept the filter on most of the day, while taking pictures.  Whether it had much of an effect is hard to say.  I did notice some little issues with using the lens, however, that you should be aware of.

Well, one way around this problem is to use Moment’s own camera app.  If you use Moment’s app, you can move the filter mount and filter from the 1x lens to the 2x lens, and then when you switch the camera setting from 1x to 2x, it’ll work.  You can use the CPL filter on the 2x lens if you use the Moment camera app.  Yes, it’s a pain to detach the mount and the filter every time you switch from 1x to 2x, but there’s no way around that.

For the heck of it, I tried the filter just now, attached to the 2x lens, using the Moment app.  I took a photo of my bathroom floor.  The floor in our apartment is concrete and does reflect some light.

Here’s the floor with no filter.  There’s a little glare.

From the exact same position, with the filter.

Both parts of the floor – the light part and the dark part – are darker overall, and the pattern on the floor is more distinct when using the filter.

I’ll continue to use the filter on sunny, high-glare days. Whether I’ll consciously see a difference remains to be seen.  I think for me, some of the satisfaction I get from using the filter is probably psychological, if I’m being honest.  As time goes on and (presumably) I get more skillful at viewing and evaluating photo quality, the effect of the polarizing filter may become more apparent.

I’ve become hooked on Moment’s lenses for the iPhone. While browsing their website, I saw a pouch designed for carrying two lenses.  The pouch can be attached to the strap of a backpack, or to a belt around your waist.  It was exactly what I needed, so I ordered it, received it, and it’s perfect.  It’s nice and small, which I like.

It’s leather, with the Moment font across the front.  When you unzip it, you see a piece of foam rubber with holes cut out inside, designed to snugly hold two lenses.

There’s a small stretchy loop on the side for holding the lens cleaning pen and there are two Velcro flaps: a wide flap for attaching to a backpack strap, and a narrow one for your belt.

I gathered up my fisheye lens and my anamorphic lens, plus the lens cleaning pen, and put them in the case.

Now it’s super easy to bring two lenses along with me wherever I go. 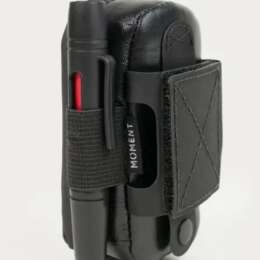 A weatherproof, low profile pouch that attaches to your backpack strap for quick access to your Moment Lenses.
Buy 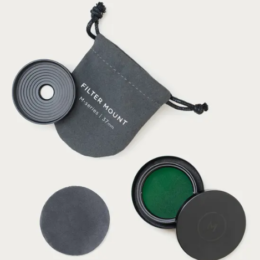 Shoot with a CPL on your phone. This set combines Moment’s pro quality CPL filter with the 37mm Filter Mount. The set will then attach to your phone using a Moment Case.
Buy
Tags: Musings, Photography, Reviews