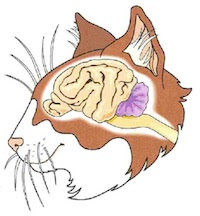 Feline Body Parts – The Brain of a Cat

The brain is the main organ that comprises the central nervous system of the cat.  It is the control center for receiving and interpreting information that comes from the cat’s own body, and from the outside world.  Learning and perception takes place in the brain, and all of the sensations – sight, sound, smell, taste, touch, and pain – are processed through here. I’ve been a veterinarian for over 28 years, and despite examining and treating thousands of cats, I’ve come to accept one thing for certain: I will never truly understand the feline brain.  (I do enjoy trying, though.)

The brain is a lump of spongy pink nerve tissue located within the skull. It can be divided into three major parts: the cerebrum, the cerebellum, and the brainstem.  The cerebrum makes up the majority of the brain tissue. It can be divided into two major portions: the right cerebral hemisphere, and the left cerebral hemisphere.  The hemispheres are connected to each other by a piece of tissue called the corpus callosum, which allows messages to be transported from one side to the other.  The cerebellum is found at the back of the brain, attached to the cerebrum.  It is responsible for physical coordination, balance, and posture.  The brainstem is located at the base of the brain. It regulates important functions such as blood pressure, breathing, and heartbeat.  The brain is covered with several membranes, called meninges.  A fluid, called cerebrospinal fluid, is found beneath the meninges, bathing the brain and protecting it from injury.

Like any other organ, the brain may become diseased or disordered.  The list of potential brain disorders is pretty long: infections, inflammations, hereditary disorders, metabolic disorders, toxic conditions, tumors, and trauma, to name a few.   A few of the more common ones I encounter as a feline practitioner include seizures, cerebellar hypoplasia, and brain tumors.

Seizures occur when neurons in the brain begin to fire all at once, in an uncoordinated fashion. Seizures are seen less commonly in cats compared to dogs.  Seizures can be divided into primary seizure disorders and secondary seizure disorders.  Primary seizure disorders are those for which there is no underlying cause.  This is better known as epilepsy.  In dogs, there tends to be a genetic basis for epilepsy, but this doesn’t seem to be the case in cats.   Secondary seizure disorders are those for which there is a known cause.  The list of disorders that can cause seizures in cats is extensive, and includes infections (such as feline leukemia virus and toxoplasmosis), metabolic disorders (low blood sugar, low blood calcium, liver disease, thiamine deficiency), brain tumors, toxins (lead, antifreeze) and trauma.  In most cases of secondary seizures, if the cause is addressed, the seizures will resolve.  Cats with epilepsy may require anticonvulsant medication, depending on the frequency and severity of the seizures.  The most commonly prescribed anticonvulsant is phenobarbital.

As noted above, the cerebellum is responsible for coordination and fine motor skills in the cat.   Cerebellar hypoplasia is a condition in which a kitten is born with an underdeveloped cerebellum at birth.  The most common reason for this is an infection with the feline panleukopenia virus while the mother is pregnant.  Affected kittens will have mobility issues as a result.  The severity of the condition varies from cat to cat, even among littermates.  Some cats are mildly affected, while others really have difficulty getting from point A to point B.  These cats may also have head tremors, sometimes called “intention tremors” because they’re more pronounced when the cat is deliberately intending to do something with its head, like eat or drink.  Although cats with cerebellar hypoplasia may look like they’re struggling, we should bear in mind that these cats have no idea that they’re any different from other cats.  Because they were born this way, they think they’re normal.  The condition is not painful, and it is not progressive – it won’t get worse over time.  There is no treatment for cerebellar hypoplasia, and there really is no need for one.  What these cats lack in mobility, they make up in personality.

Sadly, just like any other organ, the brain is also susceptible to cancer.  Brain tumors may be classified as primary or secondary.  Primary brain tumors are those that arise from cells found within the brain or the membranes surrounding the brain.  Secondary brain tumors are those that have metastasized (spread) to the brain as a result of a primary tumor elsewhere in the body.  The clinical signs of a brain tumor can vary and include abnormal mental status or behavior such as stupor, head-pressing (the cat relentlessly presses its head against a wall or other surface), walking in circles, or seizuring.     The three main treatment options for brain tumors are surgery, radiation, and chemotherapy.  Surgical removal of the tumor is rarely attempted, although meningiomas (tumors arising from the membranes that cover the brain) are sometimes surgically amenable.  The goal of chemotherapy and/or radiation is to reduce the size of the tumor and control the symptoms.  The prognosis for cats with brain tumors is poor.