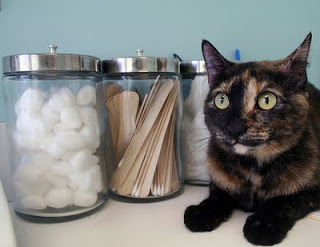 Cats are living longer than ever before, and I suppose it is human nature to wonder how a cat’s age would compare to a human’s. In talking with many people, I’ve discovered that the myth that dogs and cats age seven years for every one year is alive and well. I don’t know exactly how this notion came about, but I suspect many years ago someone decided that dogs live, on average, ten years, and people live, on average, seventy years, so dogs age approximately seven years for every one human year. This myth has been perpetuated for years, and frankly, it drives me crazy. First of all, cats live longer than dogs; this immediately skews the calculations regarding cats. Second, if you think about it, it’s not uncommon for some cats to live to be 18 or 19 years old. By the seven-to-one system, an 18 year-old cat would be equivalent to a 126-year old person. It’s true that people are also living longer than ever before, however, I’ve seen many 18 year old cats. I’ve yet to meet a 126 year-old person.

Cats age faster when they’re younger, but this slows down as they get older. At 6 months of age, a female cat can already reproduce. (If you use the seven-to-one rule, a 6 month old cat would be equal to a 3 ½ year old person, and 3 ½ year old people cannot reproduce.). In my chart, I figured that humans can reproduce around age 15. At 1 year of age, cat bones fully stop growing. This occurs in people at approximately 24 years of age, give or take a few years. Using this information (and 23 years of veterinary experience), I tried to devise a more realistic cat-human age chart that ends the seven-to-one rule once and for all.

This new chart is great for a number of reasons. I like that cats are no longer classified simply as either kittens, adults, or seniors. As a feline practitioner, I always felt uncomfortable with this old system, as I felt it was naïve and one-dimensional. Where do you draw the line between adult and senior? Eight years of age? Nine? I never felt comfortable calling an eight year old cat a “senior”, especially with cats routinely living to the age of 17 or longer. The new Feline Lifestage Guideline chart breaks the feline lifespan into six discrete stages:

This separation really seems to hit the nail on the head. Rather than call eight or nine year old cats “senior”, the term “mature” seems more appropriate. I also love the “junior” classification. Previously, kittenhood was said to come to an end when cats turn one year of age. I see many cats that are 18 months old, and while not technically “kittens”, they’ve still got that wild and crazy streak that makes me reluctant to label them as “adults”. Calling them “juniors” is perfect.

The part of the chart that I think is most compelling, however, is the age comparison. While it is very similar to the chart I devised a few years ago, this new chart is much more detailed when it comes to the early years. (click to enlarge)

I’m sure this chart will be revised in a few years. In fact, I hope it is, because that would mean that cats are living even longer and that the chart is no longer accurate. Cats living longer – this is always a good thing.