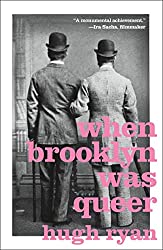 Quick Book Review: “When Brooklyn Was Queer” by Hugh Ryan

This was a really interesting book about the history of gay Brooklyn, impeccably researched and filled with fascinating stories about the borough’s queer and trans denizens.  It starts in 1855 with the publication of Brooklyn resident Walt Whitman’s Leaves of Grass, and ends just before Stonewall.  Brooklyn was a prominent port, and the waterfront attracted quite the crowed, particularly sailors, sex workers, and entertainers.  The entertainment industry played a significant role in queer history, and in this book you get engaging tales about female impersonators and drag kings and queens (including someone called Loop-the-Loop, a memorable trans sex worker.)  I enjoyed the stories about Gypsy Rose Lee, Carson McCullers, and many other entertainment and literary figures.  The author backs up his stories with quotes from newspaper articles, diaries, and personal letters that really make the tales come to life.  I had heard that Brooklyn Heights was a gay hotspot, and this book confirms it with well-documented (and occasionally bawdy) detail.  I had no idea Coney Island was also a gay gathering spot.  After WWII, Brooklyn’s place in the gay pantheon was greatly diminished as Manhattan took center stage, but with queer Brooklyn’s prominent comeback in the past decade or so, it’s interesting to hear and understand the rich history behind it.  I also liked that the author included queer women and people of color in the book, despite the limited archives on these groups.

“When Brooklyn Was Queer” by Hugh Ryan