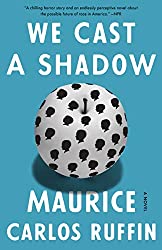 We Cast a Shadow is a satirical story in the future about a father (a black man) who tries to protect his bi-racial son from the rampant racism in the world. He does this by desperately climbing the corporate ladder at his law firm so that he can earn enough money for surgical procedures that will lighten his son’s skin and alter his facial features to make him appear white.  These procedures are painful and expensive and the kid doesn’t want them. The father’s single-mindedness in pursuing the operation for his son threatens his relationship with his wife (who is white and is adamantly opposed to changing her son’s appearance) and son.  Initially I was enjoying the book, but the plot really started to drag. There were too many unnecessary characters who were barely fleshed out, and the ending wasn’t particularly revelatory.  I give the author credit for addressing an interesting topic, i.e. self-hatred in the black community, but I found some of the satire a bit heavy-handed.  In this future world, the police have technology where they can drive past houses and determine the heart rate of the people inside.  Low heart rate suggests a drug user, high heart rates means fighting or struggling inside. This technology is only used in black neighborhoods, though.  They also talk about one of the states where all black people are mandated to wear tracking devices.  I suppose that satire isn’t meant to be subtle or nuanced, so I should have been more prepared for it; I don’t really enjoy satire as a way to tell a story.  The book is pretty well-written, though, and is definitely pretty timely given what’s going on in society.

“We Cast a Shadow” by Maurice Carlos Ruffin