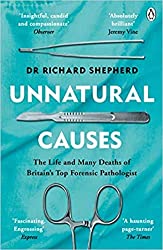 This is my kind of book: a perfect blend of science and memoir.  Richard Shepherd chronicles his journey to becoming the UK’s most accomplished forensic pathologist.  His explanations of how you can determine the time, cause, and circumstances of a person’s death are fascinating, and the cases he describes and court trials in which he’s testified as an expert witness are gripping.  He’s been involved in some very high-level post-mortems, including victims of 9-11 and Princess Diana.  But this isn’t just a science book.  Dr. Shepherd also talks about his life in very personal terms, including how the detachment necessary to be able to perform autopsies on crime victims, babies, and victims of horrific accidents affected his personal relationships and his marriage, ultimately leading to PTSD, which he eventually overcomes.  The authors honest and engaging style gives real warmth and humanity to a subject that could be seen by some as clinical and slightly repellant.  If you’ve enjoyed books by Oliver Sacks and Atul Gawande, you’ll like this one too.

“Unnatural Causes: The Life and Many Deaths of Britain’s Top Forensic Pathologist” by Dr. Richard Shepherd