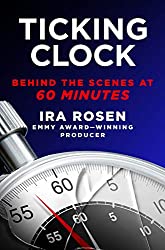 Quick Book Review:”Ticking Clock: Behind the Scenes at 60 Minutes” by Ira Rosen

Although I’m not an avid viewer, I did regularly watch the show 60 Minutes years ago during its heyday.  I’d heard that there was a lot of drama that occurred behind the scenes at the show, and this author promised a candid account.  He did not disappoint.  You quickly learn what a total prick and sexist pig Mike Wallace was, and what a narcissistic jerk Steve Kroft was.  He calls Katie Couric “lazy and disengaged” and said she thought she was “smarter than all of us who worked on the show.  She wasn’t.”  The book covers a lot of ground.  He covers the early days, all the way through the Charlie Rose #metoo scandal and beyond, and he describes how he developed a relationship with Steve Bannon (exchanging over 1000 text messages with him) in order to finally get him to appear on the show.  It was certainly interesting hearing about how the public persona of the correspondents differed drastically from their private personas, and I enjoyed hearing about some of the television executives whose names I had briefly heard before but knew very little about.  Rosen’s explanation of the 60 Minutes formula for success – how to interview, what should be covered, the psychological preparation for obtaining the best interviews – was pretty neat.  With this book, you get the highlights and the lowlights, and both aspects proved to be fascinating.  A very worthy read.

“Ticking Clock: Behind the Scenes at 60 Minutes” by Ira Rosen