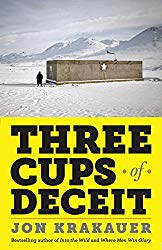 This book is an exposé of the book “Three Cups of Tea”, by Greg Mortenson.  Mortenson built his reputation as a humanitarian, building schools for underprivileged children in Afghanistan and elsewhere.  However, many of the details in his books were complete fabrications, and much of the money raised by his charity was spent in ways that were completely unaccounted for.  Krakauer is a great writer, and his documentation of the deception was compelling, but the ending of the book was pretty unsatisfying, as he never says whether Mortenson suffered any consequences for his actions.  It’s like a Lance Armstrong story, but totally unresolved.