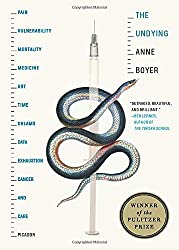 This book is by a poet, Anne Boyer, who was diagnosed with a very aggressive form of breast cancer at the age of 41.  The book is composed of several short chapters, each chapter consisting of brief paragraphs, some connected to each other, some not.  I found it a difficult book to read.  The author gets into the brutal nitty-gritty of having cancer and undergoing chemotherapy and surgery, in such a way that the only people who can truly relate to what she’s saying are those who have experienced the same thing. The parts dealing with the chemotherapy drugs and their side effects, the way mastectomy patients are booted out of the hospital the day after their surgery, and the stories of drug company duplicity, fraud, and fakery are shocking and infuriating. Much of the book, however, is philosophical and metaphysical, and in many places it’s just too cerebral.  For me, anyway.  It’s very literary, and very abstract.  It’s not an easy read, and not just because of the topic (which itself is pretty depressing), but simply by the fragmentary way it’s written.  I can tell that this is a monumental, important, and possibly brilliant work, but the way it’s written and the subject matter itself makes it almost impossible to review.  How can you rate someone’s personal breast cancer experience?  As much as I wanted to, I just couldn’t get into this book.

“The Undying” by Anne Boyer