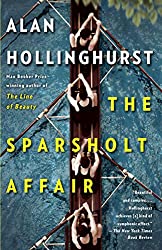 Alan Hollinghurst likes to come out with novels every 7 or 8 years.  His previous one, The Stranger’s Child, was excellent, so I was excited about this new one. (It’s not very new, actually.  It came out in 2017. I’m just getting around to it now.)

The story is broken into five parts, in chronological order, all several years apart, eventually covering about 70 years.  It begins in 1940, in war-torn Britain, where a young man, David Sparsholt, arrives at Oxford with plans to become an engineer.  He’s handsome and mysterious, with a jaw-dropping physique, and he manages to mesmerize many of the men at the university, especially Evert Dax, the son of a famous novelist.  We follow the lives, exploits, liaisons, friendships, and scandals of Sparsholt, Dax, and others in their social circle, all of them connected by their love of art, literature, and, on occasion, each other.  It’s a very British book.  You can hear the accents, smell the pipe smoke, and see the tweed jackets with elbow patches clearly in your mind as you’re reading.  The writing is detailed and very descriptive, and I really savored every word.

Hollinghurst is gay, and his novels all are gay-themed.  They’re usually very male-centric, so it was nice to see many strong, smart female characters in this book, including a lesbian couple.  It’s interesting to me to read about the very British, very specific kinds of gay experiences that occur in this novel, and how they change as the decades pass.  It’s an absorbing, elegant novel.

“The Sparsholt Affair” by Alan Hollingshurst