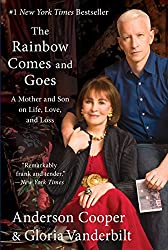 This book arose from an e-mail conversation that Anderson Cooper started with his mother, Gloria Vanderbilt, after she recovered from pneumonia at the age of 91.  Despite his mother’s fame and public life, he never really knew the details of her life, and this e-mail conversation was his attempt to find out her true story. I’ve always liked and admired Anderson Cooper, but didn’t know much about his mother other than her successful line of jeans. What a life she led!  Her father died when she was very young, and her mother left her mainly in the care of her grandmother and her nanny.  This eventually led to the world-famous “poor little rich girl” custody battle. The grandmother and nanny ended up winning the custody battle by revealing in court that Gloria’s neglectful mother was a lesbian (!) Seeking father figures in her life, she dated much older men (many of them famous, like Errol Flynn and Frank Sinatra), eventually marrying (and divorcing) a mobster, and then marrying Leopold Stokowski (she was 21, he was 63), Sidney Lumet, and Wyatt Cooper (Anderson’s father).  Wyatt Cooper died when Anderson was 10 years old, and his brother committed suicide when Anderson was 21.  Despite the wealth she was born into, Gloria was determined to succeed on her own, and she achieved great success with her line of jeans, only to be swindled out of all the money she earned by dishonest lawyers and money managers.  Most of the book is centered around Gloria’s life.  I thought I’d be more interested in Anderson’s life, but I’m glad they concentrated on Gloria’s, because it’s a really fascinating story.  She’s very self-aware of how her unusual childhood shaped her and affected those around her, and she shares the wisdom she acquired generously on these pages.  I enjoyed this book much more than I expected.

“The Rainbow Comes and Goes” by Anderson Cooper and Gloria Vanderbilt