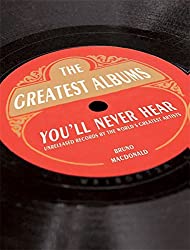 This is a very cool book that describes in excellent detail some mythical musical gems that for whatever reason never got to see the light of day.  The author covers all genres, and has done some impressive research.  At the end of each album description, he gives a rating on the odds that the record will ever be released.  The book was written in 2014, and some of the albums have indeed been released, like Neil Young’s Homegrown (which the author gave an 8 out of 10 chance that it would be released.)  Most of the music described in the book can be accessed by digging for them online somewhere, and some of the articles definitely spurred me to check it out, like “Rat Patrol from Fort Bragg” by The Clash.  Other artists include the Sex Pistols, Pink Floyd, Dylan, Bowie, The Kinks, Kraftwerk, Springsteen, and many others.  The tales behind the aborted releases are definitely interesting, especially for a major music fan like myself.  Fascinating stuff.