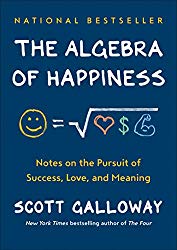 Quick Book Review: “The Algebra of Happiness: Notes on the Pursuit of Success, Love, and Meaning” by Scott Galloway

I really had no idea who Scott Galloway was when I got this book, but it looked good when I perused it in the bookstore, so I purchased a used copy. The first part was cool enough, as Galloway, a NYU professor and (as I subsequently found out) unbelievably wealthy entrepreneur, doled out some well thought out nuggets of life wisdom. But as the book progressed, it morphed into a lightweight autobiography of a super-wealthy privileged heterosexual white guy who thinks life has no meaning unless you’re married and have kids. He really needs to shut up about his kids. We get it. You love them. You treat them nicely. All parents should treat their kids nicely. We get it. Enough already. In the last half of the book, he tries to illustrate his points by telling short stories about events in his life, and most of these stories were dull and weakly illustrated the point he was trying to make, which more often than not was that his kids are great and he loves them. It all became very random at the end. No cohesion at all. Most of his philosophy was simply a recommendation to form close relationships with people, be nice to people, etc. No Earth-shattering revelations here. I just don’t know if a self-absorbed entrepreneur should be writing a philosophical book like this. And some of his career advice, like “Don’t follow your passion”, but do what you’re good at doing instead, just seemed wrong to me. You should skip this one.