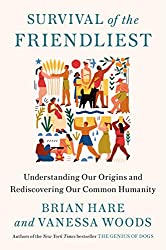 Quick Book Review: “Survival of the Friendliest: Understanding Our Origins and Rediscovering Our Common Humanity” by Brian Hare and Vanessa Woods

What is it about Homo sapiens that gave us an advantage over the other species of humans that came before us?  According to this author, it was the trait of friendliness that allowed us to advance so far, leaving the other species in the dust.  The author describes experiments in which wild animals were domesticated, and how they changed both physically and mentally, improving their evolutionary fitness.  The author, a professor of evolutionary anthropology at Duke University, and his wife, a research scientist and journalist, advances the “self-domestication theory” of humans, and how it caused the leap in cognition that we now possess. The basic idea is simple: tolerance and friendliness favored cooperation, and this was beneficial to survival and to our culture.  As a scientist myself, I enjoyed the scientific aspects of the book, but I also really liked the social and political commentary by the author, namely, his explanations for the animosity between different political groups, which is very relevant in today’s climate.

“Survival of the Friendliest: Understanding Our Origins and Rediscovering Our Common Humanity” by Brian Hare and Vanessa Woods