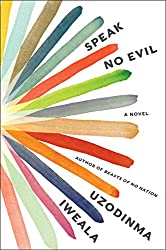 This is one of the best books I’ve read this year.  A very well-written coming-of-age story about a black teenager, Niru, and his best friend, a white girl named Meredith, and their lives in Washington, DC.  Niru is an excellent student and a track star who’s been accepted to Harvard in the fall.  Meredith has a crush on Niru, but her affection is unrequited because Niru is gay, something he desperately has to keep hidden from his very conservative Nigerian parents.  Niru’s life becomes very difficult when his father accidentally discovers Niru’s secret, and the fallout from it results in painful, dramatic turns of events for Niru, Meredith, and everyone in their circle.  It’s a short book, but very powerful, with very relatable characters.  The first half of the book is told from Niru’s perspective.  Then the book takes a sudden turn, with the second half narrated by Meredith. Very moving, very readable, impossible to put down.

“Speak No Evil” by Uzodinma Iweala