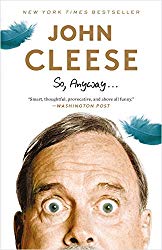 An absolutely delightful autobiography of my favorite member of Monty Python.  I’ve been a fan of the show since 1975, and although I knew much about Cleese’s career in comedy, I didn’t know much about him personally, about his family, his schooling, etc.  This book covers it all, and it’s totally absorbing.   He’s very self-deprecating, very humble, and totally hilarious.  It’s clear that he’s also a very kind person, appreciative of the opportunities he’s been given, and rarely saying a bad word about anyone. He’s met and worked with all of the giants of British comedy, and his stories about them are interesting and amusing. His relationship with Graham Chapman is particularly interesting.  What I really like about the book is that 95% of it deals with his career before Monty Python, so nearly all of the content in the book was new to me.  I read Eric Idle’s autobiography a few weeks ago; Cleese’s book is much, much better.