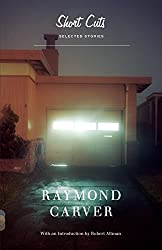 Recently I acquired The Criterion Collection version of Robert Altman’s film, Short Cuts.  The film is inspired by a collection of nine short stories and a poem by Raymond Carver, and the boxed set includes the book.  I’ve wanted to read Carver for a while, and I’m glad I finally did.  These stories, of ordinary people, were dark and quirky. Weird slices of life, where the men drink, their wives are unhappy, and life is generally unhappy.  The writing is very straightforward and unadorned, reminding me in some ways of Bukowski (especially the subject matter: drinking, affairs, some domestic violence), and in some ways of Salinger (direct, simplistic).  The tales are fairly minimalist, but they pack an emotional wallop. There’s a real humanity to the characters in the stories, even though the characters are dark and their lives often seem futile.  Carver manages, in just a few pages, to leave you wondering about these characters long after the story ends.  I am anxious to read future works of his, and can’t wait to see how Altman weaves these unrelated stories and characters into a cohesive film.