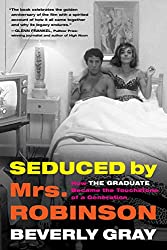 Quick Book Review: “Seduced by Mrs. Robinson: How The Graduate Became the Touchstone of a Generation” by Beverly Gray

The Graduate has held, for decades, a consistent, secure place in my list of top ten favorite movies, as well an iconic place in Hollywood history and in pop culture.  This book (which I found, in pristine condition, sitting in a small pile of books next to a trashcan on a street corner on the upper west side), is an in-depth reading of this influential film, filled with fascinating stories about the casting of the film (catapulting the unknown Dustin Hoffman to stardom), the brilliant screenwriting of Buck Henry, and the innovative filming techniques used by Mike Nichols that influenced future filmmakers forever.  Pop culture fans will enjoy the (occasionally overly detailed) analysis of the film’s importance in reflecting society’s attitudes toward sex, marriage, and the generation gap.  The author very competently describes the film’s eternal appeal, and the behind-the-scenes stories kept me anxiously turning the pages.  If you love the film like I do, you’ll swoon over this book.

“Seduced by Mrs. Robinson: How The Graduate Became the Touchstone of a Generation” by Beverly Gray