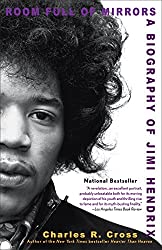 This book tells the story of Hendrix’s rise to fame as the best and most creative guitarist in rock, taking us through his childhood of poverty, hunger, and severe neglect, his enlisting in the army, his fascination with music, and his ultimate mastery of the instrument.  The book goes into his troubled family life, the girlfriends and other women in his life, the initial lack of his music’s acceptance in the U.S., his quick rise to stardom in the U.K., and his triumphant return back to the U.S.  You get stories of him meeting his heroes (Miles Davis, Bob Dylan, Eric Clapton), the influence of LSD on his writing, the struggle he faced trying to have his music be accepted by the black community, and being taken to task by some in the black community for making music that seemed to appeal mostly to a white audience.  Cool stories of famous concerts (Isle of Wight, Woodstock), celebrity encounters (Brigitte Bardot, Mick Jagger), and family squabbles over his estate after his death.  A well-written book that sticks to the facts and doesn’t sensationalize or revel in the excesses of Jimi’s life.

“Room Full of Mirrors: A Biography of Jimi Hendrix” by Charles R. Cross