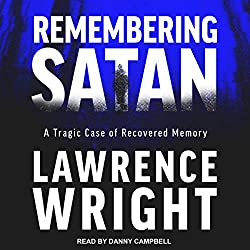 I enjoyed Wright’s book “Going Clear” about the crazy Scientologists, so I thought I’d give this one a go.  In 1988, deputy sheriff Paul Ingram of Olympia, Washington is accused by his daughters of outrageous sexual abuse. We’re talking satanic rituals, cannibalism, bestiality, abortion, gang rape, etc.  The daughters’ stories change constantly, and no physical evidence is ever discovered, and yet, nobody believes that the abuse didn’t happen. Amazingly, Ingram confesses to the abuse even though he admits he doesn’t remember it.  He assumes that his daughters are telling the truth, because he feels that they would never lie about something like this.  Exactly why Ingram voluntarily confessed to crimes committed against his family when there was no evidence for it at all is the big question.  Most of the book is spent on the details of the case and the crime investigation, but the last chapters provide some insight and analysis, although still no firm conclusion.  The influence of religion (Ingram was a very active, devout Christian), Freudian theories about sexual repression, suggestibility, mass hysteria, and the phenomenon of “recovered memories” combine in a perfect storm, resulting in one heck of a bizarre case.  A totally bonkers true crime story.