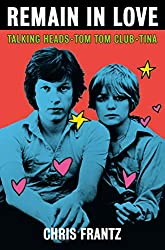 I breezed through this very enjoyable, very readable book.  Chris Frantz takes you back to the art school origins of Talking Heads, the heady, exciting early days of New York punk (lots of cool stories about CBGBs), the exhilarating early European tours where they toured with bands like the Ramones and XTC.  He describes the creative process that gave rise to much of the band’s music, how and where it was recorded, and the producers, technicians, and guest musicians involved.  There’s no snobbery here at all.  Chris and Tina are genuinely nice people, treating everyone with admiration and respect, praising the many people who helped them achieve their success.  He gives nice details about the recording of each album and the making of the film Stop Making Sense.  You get, in equal measure, how cool Brian Eno was, and how much of a jerk he could be.  He also gives the story of how Tom Tom Club came about.  Much of the book is a love letter to Tina, who he’s still absolutely crazy about after over four decades of marriage.  He has a great deal of praise for a lot of musicians – Debbie Harry, Lenny Kaye, Lou Reed, Ian Dury, Bernie Worrell, Johnny Marr – and some not-so-nice words about others.  Patti Smith comes off as aloof, and Johnny Ramone was an abusive, obnoxious bully.  David Byrne does not come off well.  While Frantz acknowledges Byrne’s talent and credits him for a lot of their success and their image, he gives numerous examples of how selfish, conniving, deceptive, and inconsiderate he could be.  Through it all, Frantz maintains his sunny disposition.  He’s very aware of how fortunate he has been in his life, and he never takes that for granted.  It’s refreshing to hear how grateful he is for his good fortune.  A must-read for fans of the band.