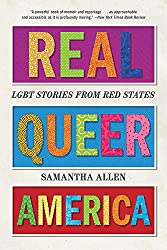 This book takes you on a tour through fun, happening gay communities where you’d be least likely to expect them:  in America’s red states.  The author used to be a male Mormon missionary. Now, she’s a woman, married to another woman.  As she takes us across the country, we meet some pretty amazing people – activists who are fighting for the rights of LGBT people, like the first openly transgender mayor (in Texas!), the owner of the only queer bar/club in Bloomington, Indiana, and lots more.  The author definitely dispels the notion that you have to move out of these hick suburbs and into big cities in the blue states if you want to live a happy and productive life as a queer person.  The book was written during the Trump years, where it was definitely easy to get discouraged, making the determination and bravery of the people in these stories all the more admirable and inspiring.  The only issue I have with the book is the author’s disdain for New York, San Francisco, and other big cities.  She could very easily affirm the red states without disparaging the blue states so much.  Sure, living in these big cities isn’t for everyone, but the stereotyping of these cities and their “coastal elite” denizens is uncalled for.  I also was expecting more objective reporting, but the author somehow manages to insert herself into the narrative at every turn.  Her life is definitely interesting, but the author is a reporter (for The Daily Beast) and this felt more like a memoir than reporting.  Still, it’s a great read.