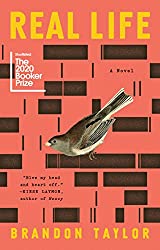 This book got great reviews and I was really looking forward to reading it.  Wallace is a quiet young black guy from Alabama.  He’s a graduate student, working in a university laboratory.  He’s gay.  He’s part of a group of friends, some of whom are gay, some are straight (and some who are gay but pretending to be straight), and all of them seem pretty horrible to me.  The book takes place over the course of one weekend, where Wallace confronts his work colleagues, his friends, and one particular classmate named Miller, with whom he has schizo sexual encounters that alternate from sweet and tender to nasty and violent.  The book touches on Wallace’s traumatic upbringing – a distant, homophobic father and repeated sexual assaults by an adult houseguest – but doesn’t delve into them deeply enough, in my opinion.  I also don’t think Wallace’s internalized racism, and the overt racism he experiences, is explored fully, and the father’s death, while mentioned several times in the book, seems more traumatic for Wallace’s friends than for Wallace.  My biggest complaint, though, is the dialogue.  I’ve never read such ridiculous, unrealistic dialogue in my life.  Every statement uttered by one person is analyzed and contradicted by the other person, who invariably says, “what did you mean by that?”  It’s almost comical.  I’m okay with “slice of life” books that don’t have much of a plot, but in this book, the main character never really grows as the story progresses, and the end was abrupt and unsatisfying.  I like to see new authors flourish, and I was excited about this debut novel, but it never moved me or resonated with me like it apparently has for so many other readers and reviewers.