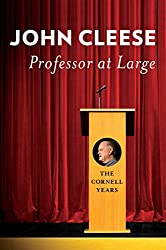 “Professor at Large – The Cornell Years” by John Cleese

I’m a huge Monty Python fan, and Cleese has always been my favorite (just edging out Michael Palin). Last year, I read his autobiography, and I loved it.  In 1999, Cleese became a professor-at-large at Cornell University, and was so popular that he secured a permanent position as the provost’s visiting professorship. In this role, he has given talks and conducted workshops on a variety of topics, most being unrelated, or only marginally related, to comedy.  I always admired his intellect, but I never knew just how brilliant he was until I read these transcripts of some of the talks he’s given to the students.  His interests range far and wide, from psychology to religion to how to foster creativity to facial recognition.  He’s a scholar and an intellectual, and he’s very funny.  It’s a side of John Cleese that true fans of his will admire and appreciate.