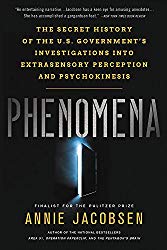 Quick Book Review: “Phenomena: The Secret History of the U.S. Government’s Investigations into Extrasensory Perception and Psychokinesis” by Annie Jacobsen.

Phenomena: The Secret History of the U.S. Government’s Investigations into Extrasensory Perception and Psychokinesis, by Annie Jacobsen. A very long book, exhaustively detailed, with a million acronyms, describing the secret ESP and telekinesis programs run by the US military.  Not surprisingly, the US program started because we heard that the Russians were doing it.  A lot of time is spent on Uri Geller, who some people believe is just a magician, while others think he does possess paranormal abilities.  The book remains reasonably impartial regarding him.  The most interesting part of the book has to do with the CIA’s remote viewing program, where psychics where subjects use their psychic abilities to view remote locations across the globe.  If you already believe that ESP, psychokinesis, etc. is real, you’ll love this book, as it will support your beliefs.  If you’re a skeptic, you may find the book frustrating as the author, in my opinion, doesn’t give equal emphasis to the instances where some of the phenomena are debunked, or could be explained in non-paranormal ways.