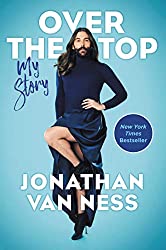 Quick Book Review: “Over The Top” by Jonathan van Ness

This is a no-holds-barred, brutally honest memoir from Queer Eye’s most outgoing, flamboyant cast member.  In the book, Jonathan describes sexual abuse at the age of 4 by an older boy from church, his sex addiction, bad experiences with meth, struggles with relationships, his HIV diagnosis, and the brutal cancer battle that his stepfather waged and lost.  The way he overcame childhood bullying and constant attacks on his self-esteem is inspiring.  It was a long road for him, but he did finally reach a point where self-love and self-care became the driving forces in his life and made him the strong, confident person that he is.  Gymnastics was and still is an important part of his life, and as a result, you’ll have to put up with truly endless descriptions of Olympic gymnastics events and tournaments, as well as overly extended analogies comparing his life struggles with some silly gymnastic incident.  Also, to protect the identities of some of the people in the book, he gave them all complex Russian names, which got a little tedious at times. The book ends on a high note, with the nice story of how he landed the role of the grooming guy on Queer Eye, and a reiteration of his overall philosophy of life, which emphasizes the importance of recognizing that it takes all types of people to make an interesting world, and that there’s no such thing as not being masculine enough or thin enough or pretty enough, that you are great the way you are and that you should recognize it and own it.

“Over The Top” by Jonathan van Ness