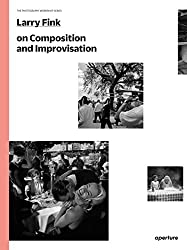 Quick Book Review: “On Composition and Improvisation” by Larry Fink

This is another book in Aperture’s Photography Workshop Series.  The photographer featured in this book is Larry Fink. His black and white photos are definitely pretty interesting, but it’s his commentary that made the bigger impression on me, particularly his comments on perception and perspective.  He quotes Lisette Model, a photographer whom he studied with, who once said to him, “Don’t ever judge that woman, that older woman with the limp or the gait, because you are she.  You will be she. You are of her, as she is of you.” He goes on to comment further about judging, and about using photography as a tool to feel kinship with others.  He said that when you judge, you are naturally competitive: “I am better than.” But when you become empathetic, you shift from “I am better than” to “I am the same as.”  He says that this allows you to look for yourself within your subjects.  I find that I tend to get more caught up in the structural nature of the image, and I ignore or downplay the role of photography as a tool for connecting with or relating to others. Later in the book, he says, “If you have talent, the only way to go about making really brilliant pictures is to give up the idea that each and every picture has to be a work of art in and of itself”.  He says that the picture has to be part of a more fluid sense of process.  “It’s just a photograph, after all.  It can be discarded. You don’t go to jail when you make a bad one.  Don’t worry about it so much.” This seems intuitive, but when you see so many photographic masterpieces everywhere you look on social media these days, it can be intimidating, and this message was welcoming and reassuring.  These insights, along with a couple of others, is what made this book very helpful to me.  Plus, his photos are truly great to look at and learn from.

“On Composition and Improvisation” by Larry Fink