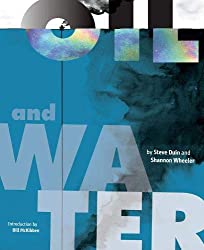 I received this graphic novel as a belated birthday gift from a college friend of mine, Mike Rosen, who happens to be the editor of the book.  It tells the story of a group of Oregonians (Mike included) who embarked on a 10-day trip to the Gulf Coast, to assess the environmental and sociological impact of the BP oil spill that occurred in 2010.  The book is broken into several small sections, some of which deal with the factual aspects of the disaster and the effects on the local communities, and some are a bit more esoteric, focusing on the lives of the Oregonians who were on the trip. It’s not a linear narrative and the story really doesn’t go anywhere, but it definitely makes you aware of the consequences of that disastrous oil spill.  I couldn’t really keep the characters straight, but I really enjoyed the black and white artwork.

“Oil and Water” by Steve Duin and Shannon Wheeler