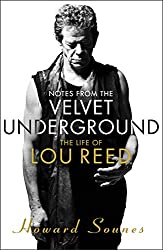 Quick Book Review: “Notes from the Velvet Underground: The Life of Lou Reed” by Howard Sounes

Two years ago, I read “Waiting for The Man”, Jerry Reed’s biography of Lou Reed.  The book covered Lou’s life pretty well, with the focus mainly on his albums.  Last year, I read Anthony DeCurtis’s biography, “Lou Reed: A Life”, which some people think is the definitive biography.  It was an excellent balance of music analysis as well as interesting accounts about his personal life.  “Notes from The Velvet Underground” puts less emphasis on Lou’s music and more on Reed’s difficult personality and extensive drug use.  Everyone knows that Lou was a cranky, nasty guy, and this book is loaded with tales of Lou’s meanness and inconsideration.  It also spends more time on Lou’s gayness/bisexuality than the other two books.  There are lots of juicy stories, especially concerning his drinking and drugging, making for a really compelling read.  It’s not as smart and analytical as DeCurtis’s book, but enjoyable nonetheless.

“Notes from the Velvet Underground: The Life of Lou Reed” by Howard Sounes