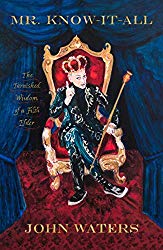 I’ve been a fan of John Waters for over 40 years. I’ve seen all of his films and read all of his books. I’ve met him twice, and he autographed his book Crackpot for me. His books have been hilarious, and this one doesn’t disappoint. The guy is completely nuts. The first part of the book deals mostly with Hollywood and his later films, with great stories about the movie industry and the actors he’s worked with. The rest of the book are his musings about Provincetown, Andy Warhol, the fantasy restaurant he’d like to design, the ideal apartment he’d create, how he’d like his own funeral to be conducted, and all sorts of other craziness. A treasure for his fans. Loved it.