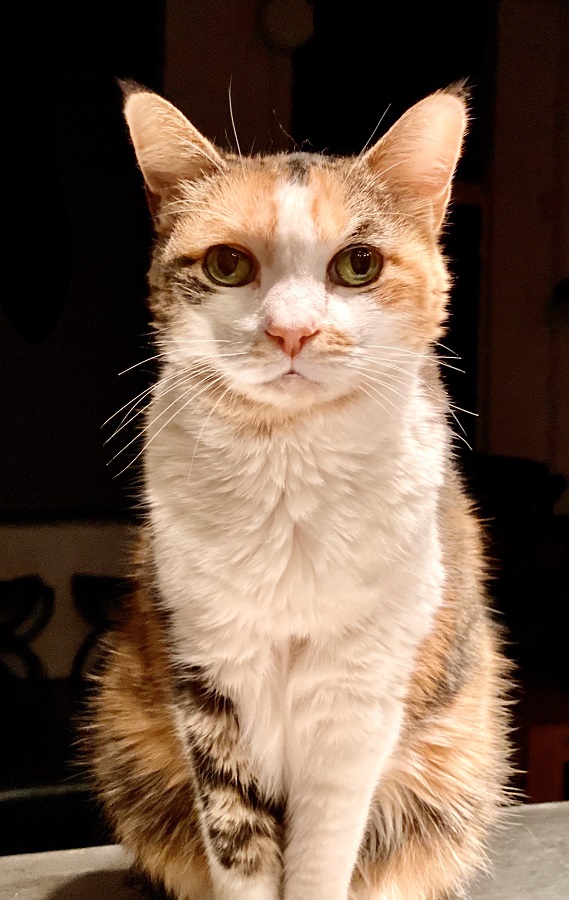 On Thursday night, January 16th, my dear cat Mittens lost her short battle with colon cancer, two months shy of her 15th birthday.  My history with cats is long and wonderful, and this ends another touching chapter in that personal history book.

Next month will mark 20 years that Mark and I have been together.  When he met me, I had an elderly cat, Ethel. I was working at the ASPCA, and an abused kitten had arrived in the ICU. I told Mark that if this kitten survived, I want to take her home and give her a great life.  She did survive, and I did take her home, and Crispy was the first kitten that we had adopted together. Crispy and Ethel weren’t together for very long, as Ethel’s health soon began to deteriorate (she became deaf, and then gradually went blind) and I elected to have her stay at my hospital full time, so I could keep a closer eye on her. Not long after Ethel passed away, an acquaintance of mine brought in to my hospital an extra-toed kitten that he had found in his neighborhood.  I told him that we were a hospital, not a shelter, and that I couldn’t take in every cat that people try to bring me off the street. I’m a softie, however, and this kitten was sweet and beautiful, and her giant front feet with the huge protruding thumbs were hilarious. I took a liking to her right away, and I asked Mark to come by the hospital to meet her, hoping that he would feel the same way about her, and we could adopt her.

Mark wasn’t much of a cat lover when I met him, however, the old adage about not being a cat lover until you have one yourself was certainly true for him.  He liked Crispy despite her moodiness (I liked her because of her moodiness), and he was receptive to the idea of two cats.  He took a look at this kitten and instantly agreed to adopt her. We dubbed her Mittens because of those huge feet. (Corny, I know.)

Mittens turned out to be a bit of a rascal, doing cute things like sleeping in the sink, sleeping in a big circular bowl on the table, and drinking water by dipping a huge paw in the water bowl, and then licking it off her foot.  She wasn’t as cuddly and affectionate as we were hoping for, and at times she remained a bit aloof, but she definitely liked being around us, and I totally adored her. Mittens tried to get closer to Crispy, but Crispy was a cranky, temperamental diva, and she rebuffed all of these attempts.  Crispy laid down an invisible line that Mittens was not allowed to cross, and when she did, she was met with hisses and growls. Her role as the beta cat was non-negotiable.

We moved from our West Village apartment to our current Chelsea loft apartment with Crispy and Mittens in tow. With a larger space there was less conflict between the two cats, and they ultimately came to a reliable truce which lasted for years.  At the age of 14, Crispy developed cancer, and after two dramatic surgeries and a challenging but successful recovery and rally at home hospital visits (all documented on my former blog Cat Man Do, and written about in Catnip magazine), Crispy ultimately succumbed to her cancer.

Mittens suddenly found herself to be the only cat in the household, and she, Mark and I became a comfortable little trio.  Every night, as Mark would make dinner, I’d take my seat at the counter on the left, Mark would take his place on the right, and Mittens would jump up and sit on the stool in the middle.  Like clockwork, every night.

In relatively short order, I became aware of  a definite personality change. Mittens became more affectionate and outgoing.  She sought us out for attention. She didn’t flee after five or six pats like she used to.  Instead, she stuck around and asked for more. She enjoyed being groomed. She followed me around.  She morphed into the outgoing, affectionate cat we had always wanted. I quickly realized that this occurred because Crispy the alpha cat was gone.  When a beta cat suddenly finds itself freed from its subordinate position, some suppressed features of its personality will blossom, and that’s what happened with Mittens.  It was wonderful.

When Mittens was 7 years old, she developed a vomiting issue.  Initially, she would vomit a few times a week. Then every day. Then multiple times a day.  Diet changes had no effect. Bloodwork and ultrasound suggested an intestinal issue, and endoscopy was performed.  She was diagnosed with inflammatory bowel disease. I put her on medication and she responded perfectly, her vomiting episodes reducing to maybe once a month, and often less.  She remained healthy for years. Later in life, she developed hyperthyroidism, a common illness in older cats, and I had her treated with radioactive iodine, which cured the condition.

After Crispy died, the house did feel a bit lonely with only one cat.  We had gotten very used to the dynamic of two cats, and the thought of adopting another one had wormed its way into our heads again.  At my veterinary hospital, we obtained a litter of four kittens. All were pretty adorable. Three were boys. One was a girl. I prefer girl cats for some reason; all of my/our cats over the last decades – Gigi, Ethel, Crispy, Mittens – have been girls.  I certainly was open to the possibility of a male, and with males comprising 75% of this litter, the odds were favorable for our next cat being a boy. I went over to the cage to check them out, and three of them were pretty shy. One, however, was sweet yet bold, coming right over to seek out attention and affection.  I took a liking to this one right away. Of course, this turned out to be the sole female in the group. Once again I had Mark come in and look, and as usual, he was smitten. We took this tiny kitten home, dubbed her Glitter, and integrated her into the family, to Mittens’s dismay.

What goes around comes around, I guess.  A decade earlier, Mittens tried desperately to ingratiate herself with Crispy, to no avail.  Now Glitter was trying the same thing with Mittens. I hoped that Mittens would reflect back on her kittenhood and realize that it was no fun to be shunned by the alpha cat and maybe this time she might be accommodating to Glitter in a way that Crispy never was to her, but sadly, that never happened.  They did reach an uneasy truce, however, and ultimately they liked being in each others’ presence, as long as there was no actual physical contact. For the most part, we had peace and harmony.

During Mittens and Glitter’s first years together, everyone was healthy.  Mittens received steroids for her IBD every other day, and her vomiting was never again an issue.   However, around December 1st, about two weeks before Mark and I were to embark on a 16-day trip to Africa, Mittens had a few episodes of vomiting.   She also developed diarrhea, which was unusual for her, especially since nothing at all had changed in either of their diets. When the diarrhea didn’t resolve and the vomiting increased a bit, I picked Mittens up and put her on the kitchen counter for an exam.  Upon examination I felt a tumor in what I thought was her colon. (You can read about this in more detail in an earlier post.) Ultrasound confirmed a colon tumor. At the referral center, they were unable to aspirate the tumor to get a definite diagnosis, so we made the assumption that this was high-grade lymphoma.  We treated her cancer with a chemotherapy protocol appropriate for this kind of tumor, and to my great relief, she mounted a dramatic response, with the tumor shrinking in size to the point of being undetectable on palpation and with x-rays. The diarrhea resolved, the vomiting stopped, and she was eating and acting normally. She was completely back to her old self.  It was nothing short of miraculous.

For reasons that we’ll never truly know, Mittens decompensated very quickly.  She was totally normal during those first four weeks of treatment, however, at the start of  week five, a little diarrhea and vomiting began to recur. She was still interested in food, though, and was acting fine, so I wasn’t too worried.  She was due for another round of chemo that Friday, and I told Mark to relate all of her recent symptoms to the doctor (the very skillful Peter Soboroff) at her next visit, so he could note it in her record.

Mark left for work on Thursday morning. The day before, she was normal, screaming for food and acting like herself, although the diarrhea persisted.  That morning, however, she had no interest in food and was acting subdued. Cats receiving chemo will have their ups and downs, especially when it comes to appetite, so a day of disinterest in food isn’t unheard of. If it continued, at least she would be seeing Dr. Soboroff the following day for evaluation.  When Mark came home, however, he was shocked and dismayed to discover Mittens on the floor, stuporous and minimally responsive. He phoned me in Amsterdam (I’m taking a class here) and asked what to do. I told him to take her to Blue Pearl (a referral center and 24-hour emergency clinic). About 20 minutes later, I was speaking to the doctor on duty.  Her vital signs were very abnormal (very low body temperature, heart rate, and blood pressure), and she was not responding to their emergency therapy. It was clear that she was not going to recover from this, and that euthanasia was the appropriate course. I was devastated, but I knew that this was the proper thing to do. Fortunately, via FaceTime, I was able to see her, speak to her, and be there with Mark while he comforted her during her last moments.

I am currently still in Amsterdam.  My Dutch language course ended yesterday.  I would have grabbed the first flight home if there was a chance of seeing her when I arrived, but alas, that was not the case.  I am due to fly home the day after tomorrow. At the moment, her passing away still feels abstract. The last time I saw her was the day I left for this trip (January 3rd), and even though I know that she is gone, each day here still feels like it did when I left, when she was alive and doing so well. But when I walk into the apartment and Mittens isn’t there to greet me, and to scream for treats when I approach the cabinet where I kept them, and to meow at me to turn on the kitchen faucet so that she can lap at the dripping water… this is when it will hit me full force, I’m sure.

Mittens was the most photogenic cat I’ve ever had, and I’m fortunate to have taken many wonderful photos and videos.  As you can see, she was a beautiful cat, and was quite unique, with her massive front feet, her quirky ways of drinking, and her almost human facial expressions.  There’ll never be another one like her, and she joins Gigi, Ethel, and Crispy in that special place in my heart, where they continue to live forever.