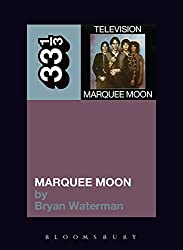 The 33 1/3 series of books are a collection of pocket-sized books that mostly provide a highly detailed analysis of one particular album by a group. Most of the books are short, around 150 pages or so.  This book was quite a bit thicker than most, around 225 pages.  I wish it was 500 pages, because I couldn’t get enough of it.  I love punk music and I’ve been enthralled by the New York music scene of the mid-to-late ‘70s that gave rise to it.  Of the major bands on the scene – The Ramones, Patti Smith, Blondie, Talking Heads – none were as big and admired as Television at the time. This book chronicles, in fascinating, impeccably researched detail, the origin of the band, their mythologized entry into the world of CBGB, their meteoric ascension, the recording of their classic album, and their abrupt breakup.  I’ve read so many books about that era, but none of them comes close to capturing the feel, the excitement, the promise and potential, as this book does.  Although one band (Television) is the primary focus of the book, they serve as a good metaphor for the entire scene at the time, in the same way that Jon Savage’s book ‘England’s Dreaming’ focuses on the Sex Pistols, as both bands represent the inception of this new musical rebellion.  Marquee Moon has been a favorite album of mine for years, and this book had me going back and listening again, and again, with a new appreciation.  An excellent snapshot of those times.