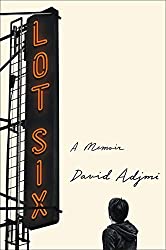 Although I was unfamiliar with the work of playwright David Adjmi, I grabbed this book because I found the uniformly good reviews enticing, especially since the author grew up in the same obscure Brooklyn neighborhood that I did.  Adjmi paints a very colorful portrait of Brooklyn’s Syrian Jewish community.  Always feeling like an outsider in his own community, family, and life in general, the author charts his struggle to come to turns with his homosexuality, his religion, his difficult parents, and his turbulent, dysfunctional upbringing.  Making countless, agonizing attempts to discover exactly who he is, he tries on a variety of personas the way people try on different outfits, with none of them ever fitting quite properly.  The author is very analytical about himself and the various worlds that he becomes entangled with, really putting his feelings and emotions under a microscope.  Every time he creates another fake self and tries to make it real, the deception eventually overwhelms him, ultimately pushing him closer and closer to who he really is.  The journey he takes us on is an engaging one, with brilliant observations, hilarious descriptions, and poignant musings. An observant and daring memoir by a fearless writer.  Highly recommended.