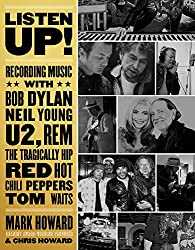 Mark Howard is a Canadian record producer who has worked with a lot of bands over the years.  I was hoping for some cool stories about the artists he’s worked with, and the book has them, but not nearly enough pages are devoted to this.  Instead, you get a lot of detailed jargon about recording equipment, as well as endless accounts of how he rented, decorated, and equipped various buildings that he converted into recording studios.  He also rambles on about his motorcycles a bit too much for my liking.  A lot of the stories involved musicians that I haven’t heard of, or have heard of but am not a fan of. Some of the stories were just not very interesting and felt like filler. There were, however, a decent amount of interesting anecdotes about Bob Dylan, Neil Young, Joni Mitchell, and Tom Waits.  I found it pretty interesting that Dylan thought that Jeff Lynne belonged in the Traveling Wilburys because he was a great record producer, and that George Harrison and Roy Orbison were worthy of membership because they’re legends, but he felt that Tom Petty didn’t have the stature required for membership.  We also learn that record producer Daniel Lanois is a hot-tempered asshole.  Overall, there are enough interesting tales interspersed within the gearhead stuff and the blah stories to make it worthwhile, but just barely.