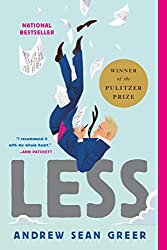 This novel follows the life of 49-year old Arthur Less, a not-very-famous writer whose much younger boyfriend of the past 9 years is about to marry someone else.  Although Arthur is invited to the wedding, he decides instead to accept all of the invitations to second-class literary events across the globe.  In each chapter, we join Arthur in Berlin, India, Paris, Morocco, and Germany, where he experiences situations that remind him of his past exploits, and how he’s soon going to turn 50.  He ponders whether he’ll ever find true love or the kind of success that his former boyfriend, Pulitzer Prize winning poet Robert Brownburn, achieved.  In fact, Arthur is more well-known for having been Brownburn’s former boyfriend than as a novelist in his own right. This novel is gay-themed, won the Pulitzer, and received glowing reviews.  I thought that I would love this book, since it’s part travelogue (and I love to travel more than anything), and it deals with a gay man on the cusp of a milestone birthday (Arthur is about to turn 50; I’m about to turn 60).  And yet, it just never grabbed me.  The writing is fabulous and lyrical, and his analogies and wordplay are terrific, but I think the book ran out of steam about 2/3 of the way through, in some places becoming ridiculously farcical.  The main character lives a pretty privileged life, for which he seems pretty ungrateful, and he never seemed to gain as much insight as I expected, given his life and adventures.  Not a bad book, but not the treasure that I was hoping for.
Finishing that book was a major tasklet