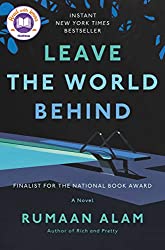 Quick Book Review: “Leave the World Behind” by Rumaan Alam

I’m not sure what to make of this book.  A middle-aged white couple and their two teenage kids are vacationing at a secluded Airbnb in the Hamptons.  Unexpectedly, the black owners of the home knock on the door, telling the guests that the power on the east coast is knocked out, presumably due to some nebulous national incident.  They’d feel safer if they could stay in there, rather than back in the city. Radio, TV, and cellphone reception has been knocked out.  Exactly what has happened remains vague, and tensions arise between the guests and the owners, making this book a thriller, I suppose.  But it’s a very low-key thriller, mostly because the plot moves along at a snail’s pace, hampered by the meandering conversations and thoughts of the characters.  The claustrophobic, dark, apocalyptic story would probably carry more impact if we already weren’t living in these claustrophobic, dark, apocalyptic Covid times.  The tension arising from people being cramped up together in a house too familiar to everybody by now and is not a particularly good suspense builder.  The fact that the guests are middle class whites and the owners are upper class blacks allows for some examination of race and class and family, but it doesn’t go very deep into this.  The ending was pretty unsatisfying.   Way too many questions left unanswered.  Would have been a great short story, but as a novel, it just didn’t work for me.  Too much time spent dwelling on every little tedious thought in each character’s head, and too vague a plotline, with a downer of an ending that leaves you hanging.

“Leave the World Behind” by Rumaan Alam