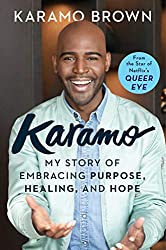 I was a big fan of the original Queer Eye for the Straight Guy back when it aired almost 20 years ago.  I had no interest in watching the reboot, but I caught an episode one day, and I got sucked in and ended up bingeing them all over the course of a month or two.  I do like the reboot more than the original, I have to say.  I was offered Karamo Brown’s book as a free audiobook, so I figured I’d give it a try.  Hey, it’s free, and he narrates it himself.  As you might expect, the book is filled with lots of platitudes and corny self-affirmations, stuff about believing in yourself and living the dream and healing yourself emotionally, blah blah blah.  The only part of the book that I found interesting was the last part, where he describes his audition for the role of the “culture guy” on Queer Eye.  I have to give him credit here.  The show wanted him to talk about art and museums and theater, but he resisted, insisting that the original show focused on treating only surface things, never delving to explore the reasons why the person getting the makeover is having problems in the first place.  It was his idea to change the job description of the culture guy, morphing into a psychologist/social worker type of role, and I do think it improves the show significantly.  The rest of the book didn’t make much of an impression, I’m sorry to say.