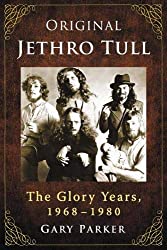 Jethro Tull were my favorite band in high school.  I was kinda obsessed with them.  Around 1980, either their music turned bad, or I outgrew it (both, I think), and I stopped closely following them.  But during those early years, they produced some amazing music, much of which I still listen to frequently.  There aren’t many books written about the band.  When I saw the title of this book, I thought it was too good to be true: a book focused solely on the best years of their career.  The book does have many strong points: there are lots of stories about the formation of the group, their early friendships, and the group dynamics.  I wish there was more about Ian’s songwriting process, and more about the recording of the individual album and songs.  There are some very interesting tales about crazy concerts and the rigors of constant touring, but no stories about destroying hotel rooms, reckless drug use and parties, and orgies with groupies.  The group really didn’t behave that way, and Ian wouldn’t have stood for it. They were very serious about their music.  There are also some rarely seen photos throughout the book. The book does have a fair number of weaknesses. First off, although the title refers to the “glory years” as being from 1968 – 1980, in the preface and in the end notes, he’s revised that to 1971 – 1980.  To the author, the band “Jethro Tull” consists of the seven band members that comprised the group during this ten-year period, which I feel unfairly diminishes the standing of their original bass player Glenn Cornick and drummer Clive Bunker.  I strongly disagree with this. In fact, the albums that they put out in 1969 and 1970 (‘Stand Up’ and ‘Benefit’) comprise two of my “top three” Tull albums.  Also, the author tends to go a little overboard with the hyperbole.  In his subjective list of their songs that he thinks are stellar, he refers to “Pan Dance”, an instrumental track included as a bonus on the War Child 40th