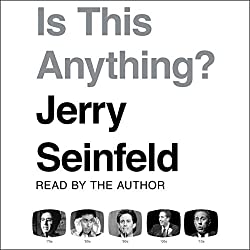 Quick Book Review: “Is this Anything?” By Jerry Seinfeld

Jerry Seinfeld writes his own material.  He has saved, for decades, everything that he has felt was worth saving, in a big accordion folder.  He went through it all, picked what he thought was the funniest stuff, and put it in this book.  It’s absolutely hilarious.  Page after page after page of his wry, observational humor that I’ve always liked.  Some of the stuff is a little dated, but even that stuff is pretty funny.   I’ve heard some of these jokes before, and they’re still funny.  I did this book as an audiobook.  While I’m sure the hardcover book is funny, I recommend the audiobook because he’s doing the narration.  It’s basically a huge, six-hour standup routine.  Listening at the gym caused me to laugh out loud a few times, garnering a few weird looks.  I listened on the subway, and thankfully I was wearing a mask, or else people might have thought I was laughing or smiling at them, which is something that could get you stabbed here in New York.   Definitely worth checking out.

“Is this Anything?” By Jerry Seinfeld