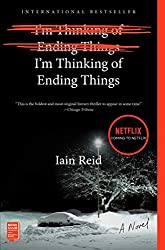 This book is a psychological thriller that didn’t leave me very thrilled at all.  Jake and his girlfriend are driving to his parents’ farm, where Jake will introduce his girlfriend to his parents.  His girlfriend has mixed feelings about Jake and spends much of her time ruminating on whether to break up with him.  After the odd visit with the creepy parents, they head back home.  On the drive, despite it snowing heavily, they stop at a Dairy Queen, and then stop at an abandoned school, where some very odd and creepy things happen.  It’s on the drive home, however, where I think the book jumps the shark.  They go to the Dairy Queen after dinner despite there being a nasty snowstorm and neither of them is really hungry.  Then they detour down an unplowed road to the abandoned school because they want to throw away the sweating lemonade cups that their Dairy Queen drinks came in, because they’re worried that the cup holders might get sticky, rather than just wait until they get home. It was at this point of the book where it seemed that the decisions being made by the characters were completely nonsensical and were being done just to advance the plot along.  Then Jake feels compelled to go into the school to confront someone, for what I think is also a ridiculous, unnecessary reason.  Soon after this, the very bizarre ending is revealed.  Some people might think this plot twist is brilliant, but I found it strange and confusing, and really unsatisfying.  Frankly, I’m not into books that require you to spend time Googling other people’s thoughts on what the fuck the ending was about.