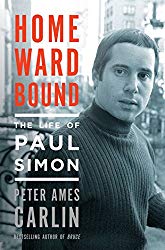 I’ve been a fan for years (mainly as S&G, although I like his solo stuff as well).  I figure he’s led a pretty interesting life, so let’s take a look.  The book is a well-written journey through Paul Simon’s Brooklyn and Queens childhood; his musical career, from his first recordings with Art Garfunkel as Tom and Jerry, through all of the Simon and Garfunkel recordings, to his solo career.  You get all of the interesting drama of the Simon and Garfunkel years, including their (still) rocky relationship, as well as the resurrection of his sagging solo career that occurred when he made a dramatic musical style shift with Graceland.  It would have been better if this had been an authorized biography, but it was still interesting nonetheless.