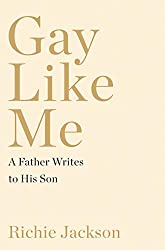 Quick Book Review: “Gay Like Me: A Father Writes to His Son” by Richie Jackson

This short book, by a successful Broadway, TV and film producer, is written like a long-form, multi-chaptered letter. The addressee is his 18-year old son.  When his son came out to him as gay, the author was compelled to look back on his own experiences and struggles as a gay man, and hopefully pass on some advice and wisdom.  The book is a celebration of gay life and identity, as the author highlights the progress gay people have made in all areas of life.  It’s also a warning not to be complacent because despite all of the advances that have occurred, bigotry and homophobia are still evil forces that we have to constantly contend with.  And finally, it’s a rallying cry, urging his son to get involved, give back to the community, and embrace the activism that has resulted in our achieving what we have today, because the fight will never be over.   The book is well-written and I admire the author’s past and current activism and care for his fellow man, but he sees the world through a very, very narrow lens.  Yes, being gay is a core part of my own identity, but for the author, it is the only aspect of it.  As George Costanza once put it, the book is “steeped in gayness”.  He romanticizes being gay as if he’s won the lottery, and I also think he overstates some of the challenges of being gay. Half the book was uplifting, especially the author describing his joy at becoming a parent, but the other half was a bit preachy, and way too heavy on the evil and dangers that await him in the world.

“Gay Like Me: A Father Writes to His Son” by Richie Jackson