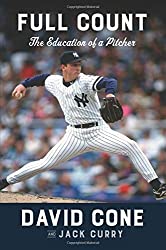 Quick Book Review: “Full Count: The Education of a Pitcher” by David Cone

I was a Mets fan in the ‘80s and ‘90s, and David Cone was always an interesting character.  He’s won 20 games a few times, pitched for World Series Champion teams, has won a Cy Young award, and pitched a perfect game.  He’s seen a lot in his career, so there’s a lot of source material for a good book.  The thing that’s striking (bad pun) about this book is the fanatical detail and deep, heavy insight that Cone achieves in describing exactly what goes through a pitcher’s mind during a season and a game.  The psychology behind every pitch is intense and Cone was obsessive about it.  One bad pitch would gnaw at him and nearly psych him out, and one good pitch might get him totally back into his rhythm.  He delves into the importance of having a catcher that understands you, and relates lots of tales about Darryl Strawberry, George Steinbrenner, Joe Torre, Dwight Gooden, David Wells, and many other players.  Every pitch is explained, every grip, every movement on the mound, every glance into the dugout, every thing that made him happy and every thing that infuriated him.  Every detail is discussed, things you’ve definitely never considered before.  The book is well-written and very illuminating for any baseball fan who is just as interested in the psychology and minutiae of the game as well as the events of the game itself.

“Full Count: The Education of a Pitcher” by David Cone